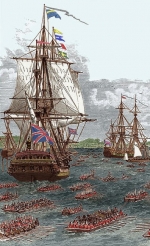 Join us to launch a new work by local historian Thomas Dresser: Martha’s Vineyard in the American Revolution. While colonists revolted against British oppression on the mainland, the American Revolution played out in miniature on our island. We've heard about the destruction of the Holmes Hole Liberty Pole, of Grey’s Raid on Island farmers' sheep, and of the story behind Tea Lane, but there’s so much more. Tom Dresser has researched the stories of those days of war, when the Royal Navy patrolled the Vineyard Sound and a host of locals rose up for independence.

The Zoom link for this program will open half an hour before the program's start time, so come in a little early, set up your devices, get comfortable, and turn your mic and video off until you are invited to turn them on again. This program will not be recorded.

Registration for this event has now closed.